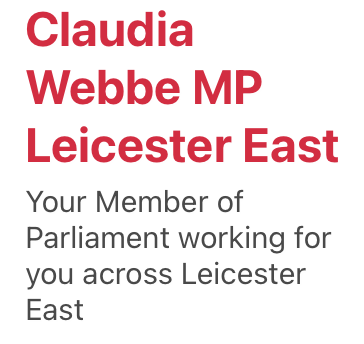 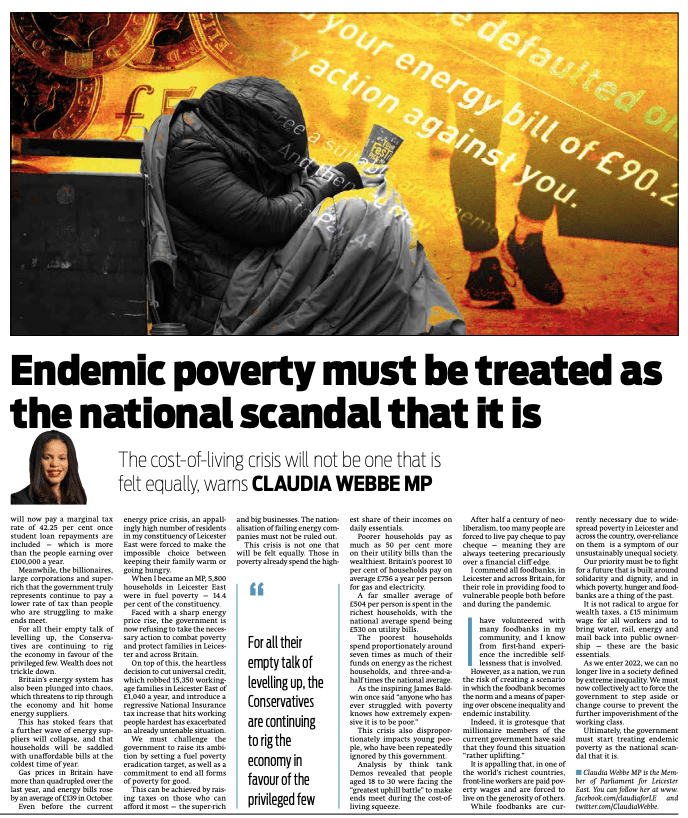 FOR Christmas this year, this Tory government of the super-rich has given the British public a cost-of-living crisis that will hit the most vulnerable hardest.

Between the uncontrolled pandemic, inflation and the end of Covid support schemes, households across the country are facing a difficult winter.

UK household incomes could be down £1,000 next year, according to analysis by the Resolution Foundation think tank, as rising prices combine with welfare benefit cuts and rising taxes.

The Institute for Public Policy Research says a typical family will lose £500 a year because of the planned increase in National Insurance and an expected 5 per cent rise in council tax.

Many households now face a “triple whammy” of energy price rises, the planned National Insurance tax rise and the impending £20 cut to universal credit — which will see six million families lose over £1,000 a year.

Before the pandemic 14.5 million people in the UK were living in poverty, equating to more than one in five people — most of whom are in work — and this has increased significantly due to the inequitable impact of the virus.

Energy bills may rise as much as 30 per cent, home rental is up 8.5 per cent, and household debts are soaring.

The Food and Drink Federation believes food prices have risen by 9 per cent in time for Christmas.

Inflation increased by 4.2 per cent in October, the highest in a decade. That’s more than double the Bank of England’s target and there are fears it could rise to 6 per cent. This means that everyday items are only getting more expensive.

Food and drinks prices are up across the country, playing a major role in Britain’s cost-of-living crisis. According to the Office for National Statistics, supermarket prices increased by 1.1 per cent in August, which is the sharpest rise since around the financial crash in 2008.

On top of this, Boris Johnson announced a planned National Insurance increase which will see workers paying around 1.25 percentage points more in deductions, which equates to at least another £254 to the tax bill of a median wage earner.

This will take effect in April 2021 — just when energy bills are next expected to increase.

This tax will hit young, poorly paid people hardest, taking more out of their pay packets at a time when wages are failing to keep up with Britain’s cost of living.

It means a landlord who rents out dozens of properties won’t pay a penny more, but the tenants working in full-time jobs will.

The rise in National Insurance means graduates earning over the UK average of £27,295 will now pay a marginal tax rate of 42.25 per cent once student loan repayments are included — which is more than the people earning over £100,000 a year.

Meanwhile, the billionaires, large corporations and super-rich that the government truly represents continue to pay a lower rate of tax than people who are struggling to make ends meet.

For all their empty talk of levelling up, the Conservatives are continuing to rig the economy in favour of the privileged few. Wealth does not trickle down.

Britain’s energy system has also been plunged into chaos, which threatens to rip through the economy and hit home energy suppliers.

This has stoked fears that a further wave of energy suppliers will collapse, and that households will be saddled with unaffordable bills at the coldest time of year.

Gas prices in Britain have more than quadrupled over the last year, and energy bills rose by an average of £139 in October.

Even before the current energy price crisis, an appallingly high number of residents in my constituency of Leicester East were forced to make the impossible choice between keeping their family warm or going hungry.

When I became an MP, 5,800 households in Leicester East were in fuel poverty — 14.4 per cent of the constituency.

Faced with a sharp energy price rise, the government is now refusing to take the necessary action to combat poverty and protect families in Leicester and across Britain.

On top of this, the heartless decision to cut universal credit, which robbed 15,350 working-age families in Leicester East of £1,040 a year, and introduce a regressive National Insurance tax increase that hits working people hardest has exacerbated an already untenable situation.

We must challenge the government to raise its ambition by setting a fuel poverty eradication target, as well as a commitment to end all forms of poverty for good.

This can be achieved by raising taxes on those who can afford it most — the super-rich and big businesses. The nationalisation of failing energy companies must not be ruled out.

This crisis is not one that will be felt equally. Those in poverty already spend the highest share of their incomes on daily essentials.

Poorer households pay as much as 50 per cent more on their utility bills than the wealthiest. Britain’s poorest 10 per cent of households pay on average £756 a year per person for gas and electricity.

A far smaller average of £504 per person is spent in the richest households, with the national average spend being £530 on utility bills.

The poorest households spend proportionately around seven times as much of their funds on energy as the richest households, and three-and-a-half times the national average.

As the inspiring James Baldwin once said “anyone who has ever struggled with poverty knows how extremely expensive it is to be poor.”

This crisis also disproportionately impacts young people, who have been repeatedly ignored by this government.

Analysis by think tank Demos revealed that people aged 18 to 30 were facing the “greatest uphill battle” to make ends meet during the cost-of-living squeeze.

After half a century of neoliberalism, too many people are forced to live pay cheque to pay cheque — meaning they are always teetering precariously over a financial cliff edge.

I commend all foodbanks, in Leicester and across Britain, for their role in providing food to vulnerable people both before and during the pandemic.

I have volunteered with many foodbanks in my community, and I know from first-hand experience the incredible selflessness that is involved.

However, as a nation, we run the risk of creating a scenario in which the foodbank becomes the norm and a means of papering over obscene inequality and endemic instability.

Indeed, it is grotesque that millionaire members of the current government have said that they found this situation “rather uplifting.”

It is appalling that, in one of the world’s richest countries, front-line workers are paid poverty wages and are forced to live on the generosity of others.

While foodbanks are currently necessary due to widespread poverty in Leicester and across the country, over-reliance on them is a symptom of our unsustainably unequal society.

Our priority must be to fight for a future that is built around solidarity and dignity, and in which poverty, hunger and foodbanks are a thing of the past.

It is not radical to argue for wealth taxes, a £15 minimum wage for all workers and to bring water, rail, energy and mail back into public ownership — these are the basic essentials.

As we enter 2022, we can no longer live in a society defined by extreme inequality. We must now collectively act to force the government to step aside or change course to prevent the further impoverishment of the working class.

Ultimately, the government must start treating endemic poverty as the national scandal that it is.