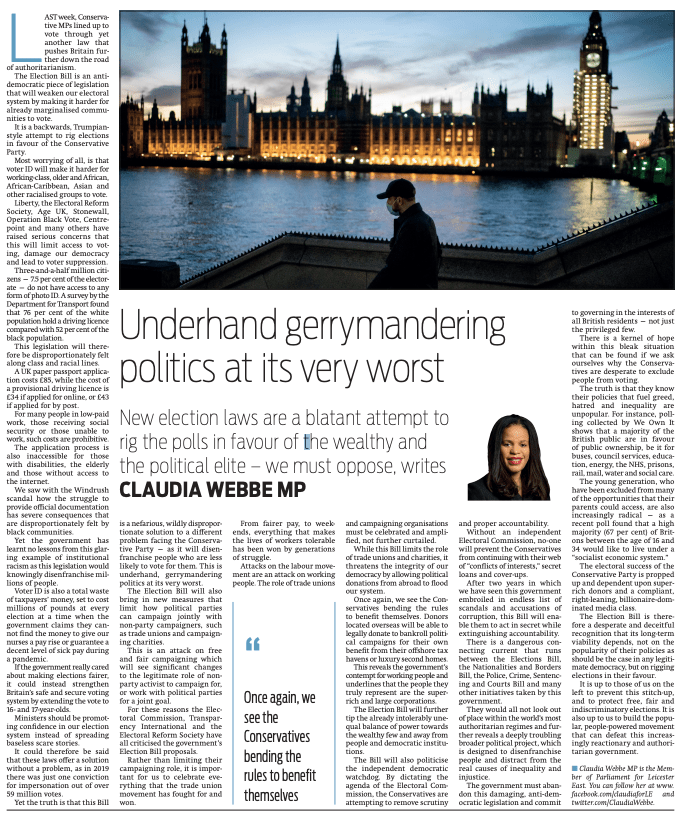 LAST week, Conservative MPs lined up to vote through yet another law that pushes Britain further down the road of authoritarianism.

The Election Bill is an anti-democratic piece of legislation that will weaken our electoral system by making it harder for already marginalised communities to vote.

It is a backwards, Trumpian-style attempt to rig elections in favour of the Conservative Party.

Most worrying of all, is that voter ID will make it harder for working-class, older and African, African-Caribbean, Asian and other racialised groups to vote.

Liberty, the Electoral Reform Society, Age UK, Stonewall, Operation Black Vote, Centrepoint and many others have raised serious concerns that this will limit access to voting, damage our democracy and lead to voter suppression.

This legislation will therefore be disproportionately felt along class and racial lines.

A UK paper passport application costs £85, while the cost of a provisional driving licence is £34 if applied for online, or £43 if applied for by post.

For many people in low-paid work, those receiving social security or those unable to work, such costs are prohibitive.

The application process is also inaccessible for those with disabilities, the elderly and those without access to the internet.

We saw with the Windrush scandal how the struggle to provide official documentation has severe consequences that are disproportionately felt by black communities.

Yet the government has learnt no lessons from this glaring example of institutional racism as this legislation would knowingly disenfranchise millions of people.

Voter ID is also a total waste of taxpayers’ money, set to cost millions of pounds at every election at a time when the government claims they cannot find the money to give our nurses a pay rise or guarantee a decent level of sick pay during a pandemic.

If the government really cared about making elections fairer, it could instead strengthen Britain’s safe and secure voting system by extending the vote to 16- and 17-year-olds.

Ministers should be promoting confidence in our election system instead of spreading baseless scare stories.

It could therefore be said that these laws offer a solution without a problem, as in 2019 there was just one conviction for impersonation out of over 59 million votes.

Yet the truth is that this Bill is a nefarious, wildly disproportionate solution to a different problem facing the Conservative Party — as it will disenfranchise people who are less likely to vote for them. This is underhand, gerrymandering politics at its very worst.

The Election Bill will also bring in new measures that limit how political parties can campaign jointly with non-party campaigners, such as trade unions and campaigning charities.

This is an attack on free and fair campaigning which will see significant changes to the legitimate role of non-party activist to campaign for, or work with political parties for a joint goal.

For these reasons the Electoral Commission, Transparency International and the Electoral Reform Society have all criticised the government’s Election Bill proposals.

Rather than limiting their campaigning role, it is important for us to celebrate everything that the trade union movement has fought for and won.

From fairer pay, to weekends, everything that makes the lives of workers tolerable has been won by generations of struggle.

Attacks on the labour movement are an attack on working people. The role of trade unions and campaigning organisations must be celebrated and amplified, not further curtailed.

While this Bill limits the role of trade unions and charities, it threatens the integrity of our democracy by allowing political donations from abroad to flood our system.

Once again, we see the Conservatives bending the rules to benefit themselves. Donors located overseas will be able to legally donate to bankroll political campaigns for their own benefit from their offshore tax havens or luxury second homes.

This reveals the government’s contempt for working people and underlines that the people they truly represent are the super-rich and large corporations.

The Election Bill will further tip the already intolerably unequal balance of power towards the wealthy few and away from people and democratic institutions.

The Bill will also politicise the independent democratic watchdog. By dictating the agenda of the Electoral Commission, the Conservatives are attempting to remove scrutiny and proper accountability.

Without an independent Electoral Commission, no-one will prevent the Conservatives from continuing with their web of “conflicts of interests,” secret loans and cover-ups.

After two years in which we have seen this government embroiled in endless list of scandals and accusations of corruption, this Bill will enable them to act in secret while extinguishing accountability.

There is a dangerous connecting current that runs between the Elections Bill, the Nationalities and Borders Bill, the Police, Crime, Sentencing and Courts Bill and many other initiatives taken by this government.

They would all not look out of place within the world’s most authoritarian regimes and further reveals a deeply troubling broader political project, which is designed to disenfranchise people and distract from the real causes of inequality and injustice.

The government must abandon this damaging, anti-democratic legislation and commit to governing in the interests of all British residents — not just the privileged few.

There is a kernel of hope within this bleak situation that can be found if we ask ourselves why the Conservatives are desperate to exclude people from voting.

The truth is that they know their policies that fuel greed, hatred and inequality are unpopular. For instance, polling collected by We Own It shows that a majority of the British public are in favour of public ownership, be it for buses, council services, education, energy, the NHS, prisons, rail, mail, water and social care.

The young generation, who have been excluded from many of the opportunities that their parents could access, are also increasingly radical — as a recent poll found that a high majority (67 per cent) of Britons between the age of 16 and 34 would like to live under a “socialist economic system.”

The electoral success of the Conservative Party is propped up and dependent upon super-rich donors and a compliant, right-leaning, billionaire-dominated media class.

The Election Bill is therefore a desperate and deceitful recognition that its long-term viability depends, not on the popularity of their policies as should be the case in any legitimate democracy, but on rigging elections in their favour.

It is up to those of us on the left to prevent this stitch-up, and to protect free, fair and indiscriminatory elections. It is also up to us to build the popular, people-powered movement that can defeat this increasingly reactionary and authoritarian government.